Over 40 coders and 30 educators joined forces at Kean University. With the additional support of  half dozen educator-designers hailing from Singapore to Great Britain who coached teams via G+, we built:

Coder teams have recieved an email asking them to open source and donate their code to New Visions for Public Schools 501(c)3, and to indicate their interest in bringing their projects to a “Production state” for use by educators everywhere. We will keep you posted about these resources as they become available.

Objective of the Project: The current Google «Show Summary of Responses» (The Bar charts and Stats) is based on raw data and cannot be modified/controlled by the user. In order to improve the auto reporting built-in feature set, the data must be manipulated to use more powerful tools like: Fusion Tables, Pivot Tables/Graphs and Tableau.[Not a valid template] 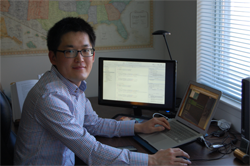